This is the final part of this 3-part blog post, there is a possibility that in the future we may continue with adding further modifications and improvements but they will be published on separate blog posts.

So let’s get on with the final post. I would like to start by mentioning that we wanted to challenge ourselves by allocating a budget of just 10 euros to design and build a replacement mainboard. After a couple of minutes we had our part list ready and a couple of minutes later we also found the required parts which we are also sharing with you below:

The brains for this mainboard is the ATMEGA168, although we could have used the Atmel Studio to develop on it, we decided to stick with the Arduino Framework, as we thought it might be easier for beginners to use and experiment upon.

Once we had a working prototype built on a breadboard the next step was to shrink it to fit on a protoboard with the maximum size of 9.4 CM X 5.1 CM with all components and wiring routing. 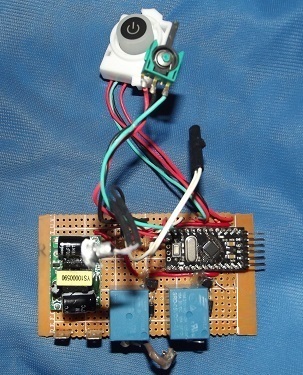 (the TVR is missing from this photo, but should be soldered between the live and natural)

All of the designs and code is licensed under GPL, so you are free to build your own with improvements as long as you release them back to public for free.

As stated earlier, other improvements or modification could be done, which include:

If anyone, does decide to build one for themselves or would like to get a built one, let us know on facebook!